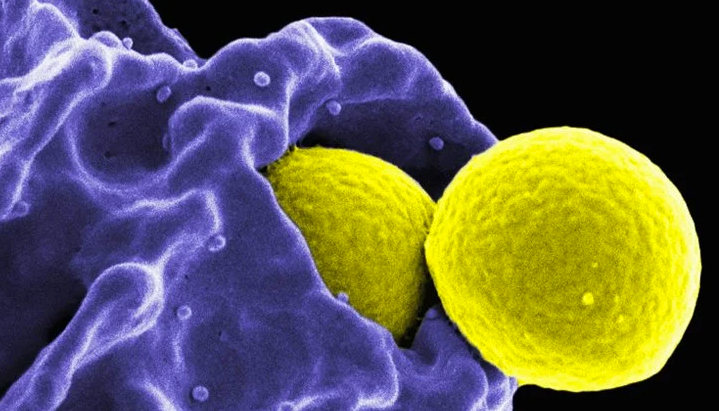 While the world struggles to end the COVID-19 pandemic, experts say we’re already dealing with another global infectious-disease threat.

Antibiotic-resistant bacteria don’t get as much attention as COVID-19, since the diseases they cause spread slowly and steadily, rather than taking the world by storm in a short period of time.

But bacteria could become a COVID-19-level threat, experts say. And it will happen in a slow march.

According to the CDC, nearly 3 million Americans per year contract an antibiotic-resistant bacterial infection. Of those, roughly 35,000 die.

Globally, approximately 700,000 die from these infections every year. The World Health Organisation projects that, at current rates, around 10 million people could die from antibiotic-resistant infections annually by 2050.

Because of the overprescription of antibiotics, the overuse of them in livestock, and other factors, many different kinds of bacterial infections including strains of gonorrhea, tuberculosis, and salmonella have become extremely hard, sometimes even impossible, to treat. That’s because the tiny portion of bacteria that survive these antibiotics evolve and reproduce, developing resistance. Around the world, 230,000 die each year from antibiotic-resistant tuberculosis alone.

Steffanie Strathdee, a professor of medicine at the University of California, San Diego, told Insider that we’re not talking about the threat nearly enough.

“Unlike COVID-19, which came along suddenly and burst on the scene, the superbug crisis has been simmering along,” Strahdee said. “It’s already a pandemic. It’s already a global crisis, and it’s getting worse under COVID.”

Tom Frieden, the former CDC director and the CEO of Resolve to Save Lives, told Insider that the US government needs a more aggressive and multifaceted approach to fight what he calls “nightmare bacteria.” He added that the medical community should focus in particular on how infectious disease spread through hospitals

“I have absolutely no doubt that in 20 or 40 years, we will look back at healthcare as it was implemented in 2020 and shake our heads in wonder about how they could have let so many infections spread in healthcare facilities,” Frieden said.

“We’re just not anywhere near where we need to be in terms of infection prevention and control.”

A ‘dysfunctional’ public-health system makes the problem hard to fix

Much of the attention and resources that would be devoted to the bacteria threat are currently directed toward trying to defeat COVID-19, Strathdee said. In that sense, the coronavirus pandemic may, perversely, be making the antibiotic-resistant bacteria problem worse.

If an extremely antibiotic-resistant strain of it develops, it could spread and kill “countless young women,” according to Lance Price, founding director of the Antibiotic Resistance Action Centre at George Washington University.

“They could go to the doctor with what they think is a routine bladder infection and end up dead from bloodstream infections as the doctors try and fail to treat their infections as it ascends from the bladder to the kidneys and into the blood,” Price said.

The COVID-19 pandemic, Price added, has exposed how our “dysfunctional” public-health system “has left us vulnerable to slow-spreading, antibiotic-resistant bacteria.”

“The US is not prepared to deal with bacterial pandemics, as proven by our inability to deal with many simultaneous, ongoing epidemics and pandemics of multidrug-resistant bacteria that are currently circulating,” Price said.

Fortune told Insider that bacteria will gain resistance to new antibiotics over time, so we’ll have to be careful about how we use them and keep developing new drugs to face the problem.

But it’s been decades since a new class of antibiotics has been developed. Companies like Achaogen and Aradigm, which focused on creating new ones, have shuttered over the past few years. And pharmaceutical giants like Novartis and Allergan have abandoned the effort altogether.

Drug manufacturers, Fortune said, don’t see as much profit in developing new antibiotics as they do other drugs. Many have invested in developing a new antibiotic and failed, she said, and they can make more money by developing drugs people take regularly rather than only when they have an infection.

Companies also can’t charge as much for antibiotics as they can for other drugs they might develop, and the shelf-life of an antibiotic is relatively short, Fortune said. So if we’re going to get new antibiotics, we need to find ways to get companies to prioritise creating them.

The United Kingdom is working to create such incentives.

The country is investing US$60 million into antibiotic development through an innovation fund, and its National Health Service has developed a subscription-style funding arrangement designed to spur pharmaceutical companies to make new antibiotics. According to that plan, the NHS would pay companies up-front for access to antibiotics, rather than paying for them based on how many pills they sell.

Outside of developing new antibiotics, a type of virus could be the solution.

A category of virus called phages naturally target and kill specific types of bacteria. If you can find the particular phage that kills the bacteria a person is infected with, you could use it to treat their infection.

Strathdee has personal experience with this kind of treatment. Her husband was infected by a superbug in 2015, and when antibiotics weren’t working, Strathdee reached out to people studying phages and superbugs.

By looking through sewage and barnyard waste, where phages are plentiful, and through the phages they had already isolated, the researchers found the phage that matched the bacteria in Strathdee’s isolate. They injected him with billions of phages in a phage cocktail, and he made a full recovery.

“Not only am I an infectious-disease epidemiologist, but my own family’s life was turned upside down and has never been the same as a result of a superbug. And if it caught me off guard, it’s going to catch everybody off guard, because the average person doesn’t know how big of a problem this is,” Strathdee said.

The centre she co-founded, IPATH, is now preparing to begin the first National Institutes of Health-funded clinical trial of phage therapy.

“What we need is a giant phage library that would be open-source, that could be used to match phages to a specific bacterial infection and used with antibiotics to cure these superbugs,” Strathdee said.

Experts also stress that the US needs to be better tracking the spread of superbugs, developing antibiotics, researching phage therapy, using existing antibiotics more carefully, and investing much more into tackling this problem before it becomes a larger crisis.

“The bottom line is we need a pluripotent response,” Frieden said. “That means sustained funding for health organisations within the US government, including the CDC. That means full support for the World Health Organisation, both in terms of funding and mandate, and that means a better, stronger approach to identifying and fixing the gaps in readiness around the world.”

This article was originally published by Business Insider.